At the northwestern tip of the American continent lies the state of Alaska. Alaska is on the surface the largest state in the USA, but also the fourth smallest in terms of population. This means that Alaska is a sparsely populated state, with an incredible amount of nature and few big cities.

Alaska did not officially become a US state until 1959, and was purchased by the US from Russia in the 19th century. It is one of two states that are not contiguous with other states in the United States (the other being Hawaii).

As mentioned, Alaska has a lot of fantastic nature, and there are many beautiful mountain ranges, lakes and glaciers in the state. The largest city is Anchorage, but the capital of the state is Juneau. More than 40 percent of all Alaska residents live in Anchorage, which says a lot about the state’s population density. In Anchorage, Alaska’s largest airport, Ted Stevens Anchorage International Airport, serves both international and domestic flights.

The largest city of Alaska is Anchorage, and the capital is Juneau. See cities in Alaska by population.

Things to do in Alaska

Alaska is the state with the most open nature in the entire United States, and there is an incredible amount to see and do. For those interested in the outdoors, Alaska is a real paradise, but there are also other things and places to discover.

Alaska has a very rich cultural life, and there are many places where you can discover the history of Alaska and the culture of the indigenous people, known as the Inuit. The two largest and most visited museums dedicated to Inuit culture are the Sheldon Jackson Museum in Sitka and the Alaska State Museum in Juneau. In these museums there are many interesting exhibitions about the history of the Inuit, and there are also special art galleries in the museums where art from the state is exhibited. Read more about both museums on their official website.

Even in the city of Fairbanks there are several interesting places connected to the old history of Alaska. There is, among other things, the Morris Thompson Cultural and Visitor Center with both historical exhibitions and an art gallery. Also nearby is the stunning Pioneer Park, which was built in the 1960s as a tribute to the 100th anniversary of the US purchase of Alaska from Russia. In Pioneer Park there are several monuments, attractions and museums. There are guided tours through this historic region.

In Alaska, as previously mentioned, there is an enormous amount of beautiful nature and exciting wilderness, and there are many opportunities to discover this. For example, there are several tours to different parts of Alaska where you can experience nature with your own eyes. In the Pack Creek Brown Bear Viewing Area in Juneau, you can scout for brown bears from several different vantage points. The area has the largest number of bears in the same area in the entire world. You have to book tickets in advance and get a permit to enter.

Liarsville Gold Rush Trail Camp at Skagway is a perfect destination for the whole family. Here you can experience what it was like for those who came to Alaska in the 19th century to look for gold. In Liarsville, in addition to learning about the gold rush, you can also taste amazingly good salmon and try panning for gold – all in a fantastically beautiful setting.

Rent a car in Alaska

It is possible to rent a car in the big cities in Alaska, and also at the international airports. Please note that it is not allowed to drive on unpaved roads with rental cars, and that it is important to plan the car journey in advance and to use GPS. This is because the road network is not that extensive and it can be easy to end up on roads that lead nowhere.

Anchorage
In the southern part of Alaska is the state’s largest city, Anchorage. With proximity to both mountains and sea, Anchorage offers a great nature experience, but also the pulse of a big city. There are many shops and restaurants here, but also countless fantastic parks. Among other things, the Anchorage Botanical Garden, the Anchorage Zoo and the Alaska Wildlife Conservation Center are located in the city, and they are all worth a visit.

In Anchorage there is also a lot of culture. Here you can visit the fantastic Alaska Native Heritage Center, where there are many exhibits about the history of Alaska and the indigenous people.

Juneau
Alaska’s capital Juneau is, on the surface, the second largest city in the entire United States. The city is surrounded by incomparable nature, and there are many excursions to make in the exciting surrounding area. But even inside downtown Juneau, there is plenty to see and do. Among other things, the city has a very rich musical life, and several music festivals and performances are organized annually.

The best way to discover Juneau is with a guided tour through the city. Via the link below you will find more information about this and how to book tickets for these guided tours.

Some of the coolest natural experiences in Juneau are the many mountains and glaciers in the immediate area. There is the possibility of hiking in the area on nice excellent hiking trails, but there is also the possibility of booking one’s own helicopter tour to the top of the glaciers. Read more and book here.

Sitka
Sitka was for a long time one of the most important port cities in Alaska, especially when the area still belonged to Russia. The city is located on an island, and there are many great attractions and things to do there. Among other things, there are several fine churches in the city, many of which are remnants from the Russian era. In the Russian Bishop’s House, which is the oldest building from the Russian era, there is an interesting museum.

Sitka is also home to the Alaska Raptor Center, where injured raptors of all species are cared for. The center is open to the public, and here you can get an exciting guided tour and learn more about the many birds that live there. Sitka is also home to the Fortress of the Bear, which is the largest reserve for bears in the entire world. There are also opportunities for whale watching in Sitka.

In Alaska there are many incredible national parks. Everything from mountains and glaciers to magnificent forests and fantastic coastlines can be found in the state.

Parks in Alaska
The most famous national park in Alaska is Denali National Park. Here there are incomparable views of the mountainous landscape, and you can also see the highest mountain on the American continent, Mount McKinley, in the park. Here there are many fine hiking trails where you can see all types of nature. There are many glaciers and tundras in the national park, and the wildlife is very rich and interesting. It is also possible to rent a bicycle in the park, and if you want, you can also jump on one of the park’s buses that take you on a tour through the fantastic landscape.

Kenai Fjords National Park is an experience out of the ordinary. With the starting point in the city of Seward, you can go out on the fjord by boat and experience the incomparable nature first hand. The fjord is home to everything from humpback whales, killer whales and otters, and the mountainous landscape that surrounds the fjord provides fantastic views. To book a Kenai Fjords National Park cruise and read more about the national park, click here.

Wrangell St. Elias National Park is one of the most powerful parks in Alaska. Some of the continent’s largest mountain ranges meet here, and it is an incredibly cool experience to see the national park. The area is also home to the historic village of Kennecott. In Wrangell St. Elias National Park offers opportunities for hiking, cycling and camping, but also skiing.

Beaches in Alaska
Alaska has a fantastic coastline in the southern parts, and there are also some beaches that are suitable for both relaxation and swimming when the weather permits. Among other things, Christiansen Lake in Talkeetna is a popular excursion destination during the summers. Here it is very nice to take a swim, or just relax for a while.

The Homer Spit in western Alaska is known for its beautiful beaches and exciting scenery. Homer Spit is a long and narrow peninsula, and here the streets are lined with many nice shops and restaurants. Although the water is too cold for swimming, there are many other activities to do in Homer Spit. Among other things, you can go on a guided tour among the many boats that are moored there, and you can also barbecue and camp on the beach.

One of the best swimming beaches in Alaska can be found in downtown Anchorage, at Goose Lake. Here there are fine sandy beaches surrounded by fantastic landscapes. At the lake there are also many wild birds to observe. 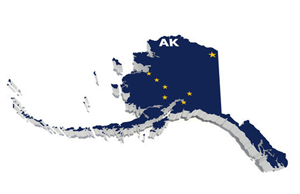