Delaware is the second smallest state in the entire United States, but is one of the most densely populated states. Delaware is located on the east coast of the United States and borders, among other things, New Jersey. There is an incomparably beautiful coastal strip in the state, with many wonderful swimming beaches.

Delaware is one of the oldest states in the United States, and therefore there are also many historically interesting sights to visit. The largest city is Wilmington, while the capital is Dover. See cities in Delaware by population.

Things to do in Delaware

Delaware has a very exciting mix of old and new, and there really is something for everyone in the small state!

Dover
Dover was already founded at the beginning of the 17th century, and therefore has a lot of history to offer. Among other things, there is an old historic district in the city with many nice buildings, shops and restaurants. In the area there is also the Sewell C. Biggs Museum of American Art, where you can view art from the last 400 years.

There are also several other nice museums and parks to visit in Dover. For example, the Delaware State Museum and First State Heritage Park are located, where you can experience the city as it looked in the past.

Delaware’s Beaches
Delaware is known for its stunning coastline. Along the coast there are several towns with incredibly beautiful beaches which during the summer months attract many visitors from the nearby big cities.

One of the largest beach resorts is Rehoboth Beach, where many vacationers come to enjoy both the beautiful beach but also the quaint and cozy town center. Also nearby are the somewhat smaller towns of Lewes, Dewey Beach, Bethany Beach, South Bethany and Fenwick Island, which together make up Delaware’s beaches. On the beaches, it is also possible to windsurf and practice many other water sports.

Winterthur Museum
Winterthur is a popular and well-known excursion destination in Delaware. In addition to a large museum, Winterthur is also home to an unparalleled garden and a large library. The estate was in private ownership until 60 years ago, when the owner, collector and flower expert Henry Francis DuPont decided to open the estate to the public.

At Winterthur there are many interesting exhibitions, including those with a focus on art and American history. The garden contains many unusual flowers and other plants, and there is much to see and experience at Winterthur for the whole family.

Rent a car in Delaware

With a rental car in Delware you can go on many pleasant excursions. The small state is perfect for road trips, and it’s easy and quick to get to the different parts. Especially the coastal strip is perfect to discover with a rental car.

There are also several special driving routes designed to give visitors the best experience of the scenery and historical attractions of Delaware. Read more about these routes here.

It is possible to rent a car at all airports and in the major cities in Delaware. 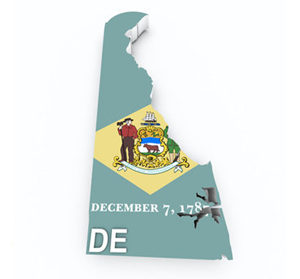