At the southeastern tip of the American continent lies the state of Florida. Florida is located on a peninsula in the gulf, and this means that the climate and landscape are very pleasant and tropical. There is a lot of fantastic nature in the state, including marshlands and miles of unparalleled beaches.

Florida has a long history, and was discovered by the Spanish in the middle of the 16th century. The area was then inhabited by Native Americans, and over the centuries there has been much conflict between the colonizers and these Natives. During the American Civil War, Florida also played a significant role, and therefore there are many historically interesting places to visit in the state.

Florida is known for its tourism and is a very popular state to visit, both by US citizens and tourists from other countries. There is an incredible amount to see and do for the whole family, and there are a large number of fantastic amusement attractions and parks in the state.

The largest city of Florida is Jacksonville, and the capital is Tallahassee. See cities in Florida by population.

Things to do in Florida

Florida is a real paradise when it comes to holiday celebrations. The state has everything from sun and swimming to unparalleled theme parks for the whole family. One of the more unique ways to discover and experience Florida is through air tours. There are several different guided tours in the air where you can experience the sunny state from above, in both airplanes, helicopters and hot air balloons.

One of the most popular and well-visited places in Florida is Disney World, which is located near the city of Kissimmee. The park is the most visited in the entire world, and opened in 1971. There is an incredible amount to see and do for the whole family: rides, water parks, hotels, restaurants, golf courses – Disney World has it all, and there are many hours of fun ahead visitors.

Another very popular destination with very cool experiences for both young and old is the Universal Resort in Orlando. Universal Resort is owned by the production company Universal, and there are several amazing parks in the resort that are incredibly cool to visit. Among other things, in the park Universal Islands of Adventures you can visit the Wizarding World of Harry Potter, which is a large theme park based on the extremely popular Harry Potter films. Here you can visit several places that are in the films, and there is also a replica of the famous wizarding school Hogwarts.

Universal Islands of Adventures also has parks dedicated to Jurassic Park and Spiderman, and there are hours of fun adventures for the whole family.

If you are keen to discover Florida’s exciting history, a visit to Castillo De San Marcos in St. Augustine on Florida’s east coast. The fort began construction in the late 17th century, and is the oldest of its kind in the entire United States. Over the centuries, Castillo De San Marcos changed hands many times, and was widely used to imprison the Native Americans who fought against the colonizers.

Today the fortress is a national monument and is open to visitors. There are several interesting exhibitions, and also some historical re-enactments are made at the fortress. Read more about Castillo De San Marcos at www.nps.gov and book tickets here.

Also the Kennedy Space Center at Cape Carnaval, a short distance from Orlando, is a very popular attraction in Florida. The space center offers many unique and exciting experiences. Among other things, you can “try out” what it’s like to walk on the moon, as well as see a real space rocket. There are many nice interactive features and exhibits, and you can even try what it would have been like to sit inside a space rocket.

Rent a car in Florida

It is possible to rent a car in Florida’s major cities, and also at the state’s various airports. Many roads in Florida are tolled, but the cost is relatively small and payment is made through an electronic pass that is usually already installed in the rental cars, or can be purchased from the car rental companies.

It is recommended to book the car online at home before departure to simplify both the rental process and the collection of the car. A good idea might be to opt for a GPS when booking the car, especially if you plan to drive inside the larger cities.

Go on a cruise from Florida

Florida is the cruise state! End or start your trip in the USA with a fantastic cruise and get tropical paradise beaches, good food and memorable cultural experiences.

From Florida, you can cruise with popular lines from ports of departure in Fort Lauderdale, Miami, Orlando, Tampa and Jacksonville. The routes go to wonderful places throughout the Caribbean island world, the Bahamas, Cuba and Mexico. The cruises can last anywhere from a few days to a few weeks, so there is something for everyone’s preferences. You can also go on longer cruises across the Atlantic from Florida to destinations in Europe.

Miami
Miami is one of the largest cities in Florida, and there is much to see and do in the city in addition to shopping and city life.

For example, there is a large number of museums in Miami, with many art museums and galleries in Downtown Miami. Miami is known for its rich music scene, and there are many clubs and other venues where music is played daily.

The city’s proximity to the sea means that there are opportunities for both swimming and other water activities in Miami. Among other things, there are several cruises that depart from the city, and it is also possible to go water skiing and jet skiing on the coast.

Jacksonville
Jacksonville is the largest city in Florida, and there are many historical attractions in the city, which is located on the east coast of northern Florida. The city has a very modern appearance, and there are several architecturally interesting buildings to view.

If you are interested in the city’s history, a visit to the Museum of Science & History is an absolute must, as several exhibitions are specifically about Jacksonville’s local history. Jacksonville also has several nice shopping centers, and also the Jacksonville Zoo and Gardens, which is the second largest in Florida.

Tallahassee
In the capital of Florida, Tallahassee, there are many historical sites and other attractions to visit. Tallahassee is located in the northern part of the state, and has no borders with the coast. However, there are several very pleasant green areas and parks inside the city, and several outdoor festivals with different themes are organized annually.

There are several historic buildings in Tallahassee, the most famous of which are the Florida Governor’s Mansion, the Florida State Capitol, and the Museum of Florida History. The city also offers very good shopping, with several shopping centers and outlets.

Florida has many unique landscapes to offer, and the state’s famous swamps are very well visited. With the USA’s longest uninterrupted coastline, Florida also has many wonderful beaches of very high quality to offer.

Parks in Florida
The most famous and well-visited national park in Florida is the Everglades, which with its swamps and rich, unique wildlife offers a very cool experience. Among other things, there are crocodiles and panthers in the park, and the area also has great historical significance and is listed as a world heritage site. Read more about this at www.nps.gov.

The Everglades is popularly discovered on airboats, and whizzing through the swamps on one is a very unique experience.

Another truly unique national park in Florida is Biscayne, located just off the coast of Miami. Biscayne consists of stunning coral reefs and several islands, and many rare fish can be seen in the clear waters of the national park. Here there are opportunities for both boating and snorkeling.

The Dry Tortugas National Park at Key West also offers fantastic waters and coral reefs, but also exciting history in the form of the massive fortress Fort Jefferson. The park can be reached by either boat or plane, and it is a very cool experience to discover the crystal clear waters.

Beaches in Florida
With its incredibly long and beautiful coastline, there are a large number of beaches to enjoy in Florida. No matter which beach or coastline you decide to visit in Florida, you will be greeted by white sand and clear waters. There are also a lot of water activities, such as surfing and water skiing.

Some of the very best beaches include Miami Beach, Fort Lauderdale, and Destin, and all of these beaches have nice boardwalks and are family-friendly. Key West is another very famous vacation spot. Here, in addition to sun and swimming, there is also the opportunity to go on a dolphin safari and play golf. 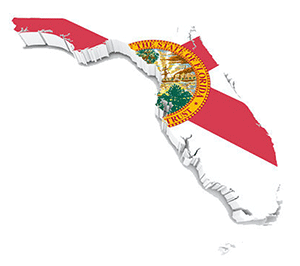