In the southern United States, just north of Florida, lies the old state of Georgia. Georgia was one of the original thirteen colonies of the United States, and there is a lot of history to see and experience in the state. The landscape and nature of Georgia is characterized by mountainous areas and beautiful coastline. The nickname The Peach State has been given to Georgia because of its many and fine peach farms. The peach is also the state’s official fruit.

The climate in Georgia is very hot and humid, and there are also some swamps in the state similar to those found in Florida. The largest city and capital of the state is Atlanta, where Georgia’s largest international airport, Hartsfield-Jackson Atlanta International Airport, is located. The airport is also the busiest in the entire world, and an incredible number of international flights land and take off here. See cities in Georgia by population.

Things to do in Georgia

Georgia has a lot to offer its visitors. Whether you are interested in history, outdoor life and fast-paced adventure or beautiful scenery, Georgia has something to offer.

Georgia played a very large role in the American Civil War, and even today there are many remnants of this era. Among other things, you can visit Old Fort Jackson in Savannah, where you can experience how the American defense functioned. Here, life in the civil war is reproduced daily with the help of contemporary actors. Also the fantastic Chickamauga and Chattanooga National Military Park, which is actually a battlefield, is clearly worth a visit. There is a lot to see and do in the park, and there are several fine exhibitions that you can be guided through.

If you want speed and wind and adventure for the whole family, there are several amusement parks to choose from in Georgia. Among other things, Lake Winnepesaukah Amusement Park in southern Georgia, with many cool water attractions. Read more about Lake Winnepesukah Amusement Park on their website here. In Georgia, there is also Six Flags over Georgia, which is the largest amusement park in the entire southeastern United States, and has several unique rides.

Northeast Georgia is home to the state’s famous wine region. There are several beautiful vineyards in the mountainous landscape, and many of these vineyards are open to the public for tastings and guided tours. During the summer months, many pleasant festivals are also organized in the region with a focus on drink, music and food.

Rent a car in Georgia

Renting a car in Georgia is both smooth and easy. It is perfectly possible to pick up rental cars from most large and well-known rental car companies in all major cities in the state. It is also possible to rent a car at Georgia’s airports. It is recommended to book the car online before heading to the US, to ensure that the car is available for pick-up. Read more about renting a car in the USA here.

There are some stretches of road in Georgia that are tolled. These are paid through an electronic pass, which is usually already installed in the rental companies’ cars. Check with your rental car company for exact details about electronic toll passes.

There are several fantastic routes in Georgia that showcase the state at its best. On the I-185 Scenic Byway, you are treated to incomparable nature and magical views from Pine Mountain. Driving the Monticello Crossroads Scenic Byway there are many opportunities to stop at places of historical interest, as the road was once used by both the original inhabitants and the first colonists.

Atlanta
In Atlanta, big city life is bubbling, and there is an incredible amount to see and do in the city. Among other things, here is the world’s largest indoor aquarium, the Georgia Aquarium and Martin Luther King’s childhood home, which is now a museum. There are also several large museums dedicated to the American Civil War.

For the pop culture buff, there is plenty to see and do in Atlanta. Success series such as The Walking Dead are filmed here, and many of the most loved films, such as Gone with the Wind, have Atlanta as a filming location.

Savannah
As the oldest city in Georgia, Savannah has a lot of interesting history to discover. Located on the coast, Savannah is a major port city, and Tybee Island has stunning beaches and Georgia’s first lighthouse. Downtown Savannah has several historic districts that haven’t changed much over the years. The streets are still cobbled here and the old houses are very well preserved. The most famous of these districts is the Savannah Historic District, which occupies much of downtown Savannah.

Macon
In central Georgia is the state’s fourth largest city, Macon. Many famous southern rock bands were born in Macon, and the city has a lively music life with festivals, clubs and record labels. Macon also has many places of historical interest. For example, Ocmulgee National Monument in southern Macon is one of the oldest burial sites in the state, and was made by Native Americans over a thousand years ago. At the mounds, there are also exhibitions showing archaeological finds from the site.

In Georgia there is a lot of varied and exciting nature to take part in. Whether you’re in the mood for beautiful mountain scenery or long sandy beaches, Georgia has it all to offer.

In the Okefenokee National Wildlife Refuge there are wetlands and swamps, and many interesting species of animals can be seen. Through the park area you get on a footbridge that gives fantastic views of the different environments.

Beaches in Georgia
Georgia has a very beautiful coastline, and here there are several holiday resorts known for their fine beaches. Tybee Island is one of the most popular spots for sunbathing and swimming, and there are also opportunities for surfing and sailing.

Even the small islands of St. Simons, Jekyll Island, and Sea Island, which are all part of the so-called Golden Islands, have incredibly nice beaches and outdoor activities. The islands are built around their beaches, and are real holiday paradises for those looking for lots of sun and swimming. 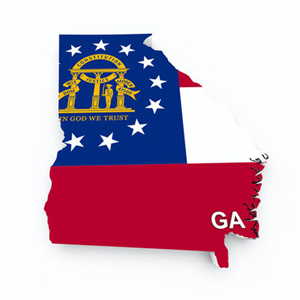