Hawaii is the only US state located on the Pacific Ocean, and also one of two states that are not contiguous with the rest of the US landmass. Hawaii is one of the top tourist destinations in the country with its amazing climate and incredible landscape of volcanoes and clear waters.

The state consists of a large number of islands, of which the eight southernmost are Niihau, Kauai, Oahu, Molokai, Lanai, Kahoolawe, Maui and the Isle of Hawaii. Of these, the Isle of Hawaii is the largest and most visited. Hawaii’s largest city and also the capital is Honolulu, which is located on the island of Oahu. See cities in Hawaii by population. Honolulu is also home to Honolulu International Airport, which is the largest airport in the state.

Hawaii is known not only for its amazing nature and climate, but also for its exciting culture. There is a great mix of many different cultures here, and there are a lot of Asian influences on the islands. Hawaii is an exciting and unique travel destination with an incredible amount to see and do on the various islands.

Things to do in Hawaii

Sun, swimming, history, fantastic nature and lots of culture. In Hawaii, there really is something for everyone.

Perhaps one of the most famous places in Hawaii is Pearl Harbour, located on the island of Oahu. During World War II, Pearl Harbor was an American military base that was bombed by Japan in 1941. Today, there are many fine memorials on the site to honor those who died in the attack. Among other things, you can visit the USS Arizona Memorial, which was the name of the last US battleship that sank during the attack. Today, the USS Missouri is moored in Pear Harbor. The ship has seen a lot, and was used, among other things, during the Second World War. For more information and tickets for guided tours of Pear Harbour, follow the link below:

On the island of Kauai is the historic town of Koloa. In Koloa there used to be a large sugar plantation. To enter Koloa one has to pass a massive and amazing avenue of eucalyptus trees, which is absolutely amazing and unique. The old part of Koloa, where the old plantation is also located, is very picturesque and has been recreated to resemble the area as it looked in the 19th century. There are shops and restaurants in 19th-century style, and strolling around the old town is like a real journey back in time.

If you are interested in Hawaii’s rich history, a visit to the Bishop Museum outside Honolulu is an absolute must. There are many interesting exhibits and the largest collection of artifacts from the Hawaiian Islands in the entire world. The museum building is also historically interesting, and was built to house research on Hawaiian culture. Today, the museum also contains natural history exhibitions and there is also a planetarium on the museum grounds.

Another popular activity in Hawaii is whale watching. In the waters around the many islands of Hawaii there is a very rich animal life, and among the most fascinating animals seen there are the humpback whales. Auau Channel near West Maui is the best place in the world to see the magnificent humpback whale. There are several ways to see the humpback whales. Read more about it on Hawaii’s official tourism page.

A great excursion destination is to visit one of the many coffee plantations on Hawaii Island. In the Kona area in the northern parts of the island there are about a hundred coffee plantations, and most of them are open to the public. In addition to nice shops and tastings, many also have guided tours through the cultivations and production. During the month of November, a large coffee festival is also held in the village of Kailua.

Rent a car in Hawaii

Renting a car in Hawaii is an awesome experience. With a rental car it is easy to get around to different parts of the island you are visiting, and with the short distances it is also possible to get from one end to another quickly. Car hire also enables excursions to places that would otherwise have been inaccessible.

It is possible to rent a car both at the islands’ airports and in the larger cities. The entire state is free of toll roads.

There are several routes adapted for car drivers who want to experience incomparable nature. On Hawaii Island, for example, there is the Mamalahoa Kona Heritage Corridor and Royal Footsteps Along the Kona Coast in the Kona area. Both of these routes go through incomparably beautiful nature and exciting historical areas. There are also several places to stop and discover more of Hawaii.

On the island of Kauiai there are also several beautiful routes. Including Holo Holo Koloa, which goes through historic Koloa and hidden beaches.

Honolulu
Honolulu is located on the island of Oahu and is both Hawaii’s largest city and capital. Honolulu is an exciting mix of old and modern, and of many different cultures. There is much to see and do in Honolulu. Among other things, the Bishop Museum is located here, which you can read more about above.

There are also several famous sights, including the landmark Aloha Tower, which is a stunning lighthouse in Honolulu’s harbor. The lighthouse was built in 1926 and has since become a symbol of Honolulu and Hawaii as a state. If you fancy shopping, a visit to the Ala Moana Center is a must. Ala Moana is the largest shopping center in Hawaii, and the largest “open air” shopping center in the entire world.

Lahaina
Lahaina on Maui is one of the most historic towns in Hawaii. During the 19th century, the city was the capital of Hawaii, and there are many historic buildings in the city. Among other things, there is a recreation of an old whaling ship here, and in the harbor there are many nice shops and restaurants. Some of the most notable buildings in Lahaina are the historic Pioneer Inn hotel and the Baldwin House.

Hilo
On Hawaii Island is Hilo, which is the largest city on the island. Hilo is located near two large volcanoes, and the landscape that surrounds the city is very exciting and unique. In addition to the fantastic beaches James Kealoha and Honoli?i Beach, there are also many nice parks here.

In Hilo there is also the Hawaii Tropical Botanical Garden in a beautiful valley with incredible nature. In the botanical garden there are, among other things, waterfalls and hundred-year-old coconut palms. Coconut Island is also a popular destination in Hilo. The island is very small, and there are many intriguing legends about the island’s alleged healing powers.

In the islands of Hawaii there are many beautiful national parks and wonderful beaches. With its exciting volcanic landscapes and long stretches of sandy beaches, there is much to see and discover in Hawaii!

Parks in Hawaii
There are several unique and exciting national parks in Hawaii. On the island of Maui is the awesome Haleakala National Park. Haleakala is a volcano, and an ancient legend tells that in the volcano the demigod Maui imprisoned the sun to make the days longer. In the park there is an incredible volcanic crater, and from the volcano you can see incomparable sunrises and sunsets. There is also a greener part of the park known as Kipahulu, which stretches along the coast with dramatic views of the sea.

On Hawaii Island there is Hawaii Volcanoes National Park, which consists of the two very active volcanoes Kilauea and Mauna Loa. Here there are magnificent volcanic landscapes, and nice hiking trails and the possibility of camping. There are also many facilities connected to the park, including an art gallery and a museum.

Beaches in Hawaii
On all of Hawaii’s islands there are incredibly beautiful beaches. On Oahu, there is one of the world’s best beaches, Waikiki Beach, where surfing is also very popular. Other beaches on Oahu that are known for their surfing and swimming are Kailua Beach and North Beach.

On Maui, there is Kaanapali Beach, which has been named the best beach in the United States. The beach is located on the western part of the island and is known for its extensive sandy areas. There are many activities here for both young and old, and is a really lovely holiday resort. On Maui there is also the opportunity to learn to surf. Read more about this and book a surfing lesson via the link below.

Hawaii Island has some truly unique beaches. Among other things, there is Punaluu Beach Park, which has black sand instead of white. The black color has been added due to the high volcanic activity in the area, and it is a very unique and cool feeling to walk on the black sand beach. For the family, Spencer Beach Park is a perfect place to spend time. Here there are quiet beaches and nice areas for, among other things, picnics and other pleasant activities. 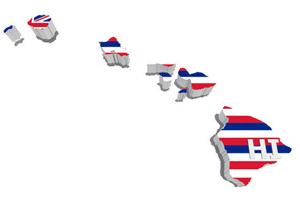