In the eastern parts of the central United States is the state of Illinois, which is the fifth largest state in the country in terms of population. Illinois is known to be a financial center, and has many industries and businesses. Illinois only gained statehood in the 19th century, when many colonists from other states moved there after the American Revolution. However, the state was colonized before that by French Canadians.

The state took its official motto “The Land of Lincoln” in the 1950s, in honor of US President Abraham Lincoln who lived in Illinois when he was elected.

The capital of Illinois is Springfield, but the city is only the sixth largest in the state in terms of population. The very largest city is Chicago, which is a metropolitan metropolis. Chicago is also home to O’Hare International Airport, which is the second busiest airport in the world. See cities in Illinois by population.

Things to do in Illinois

In Illinois, metropolitan pulse is mixed with beautiful landscapes. In addition to many large parks, Illinois also has a large number of wineries and wineries that are open to visitors. In southern Illinois, for example, there is a special “wine trail”, where you can ride around a trail where there are many vineyards.

Illinois is also an interesting state historically. Many American presidents have lived and worked in the state, and one of the most famous is undoubtedly Abraham Lincoln. In Illinois there are many monuments and the mouse dedicated to him and in Springfield there is one of the most visited museums dedicated to a president in the entire country. This museum is also a library with many old texts.

If you have access to a car in Illinois, a trip on the legendary Route 66 that runs through the state is a must.
Route 66 is one of the oldest highways in the United States and was established back in the 1920s. The road stretches from Chicago to California. Along the way there are many museums and other attractions that are good to stop at, as well as several restaurants.

If you want to experience a piece of living history, a trip to Galena, located in the northwest corner of Illinois, is a must. In Galena there is a historic street where the buildings look exactly as they did during the American Civil War. Over 100 shops, art galleries and restaurants line the street, and the town is widely known for its well-preserved historic buildings.

Rent a car in Illinois

It is possible to rent a car and pick up rental cars in all major cities and airports in Illinois. There are many good rental car companies to choose from. With a rental car, it’s easy to get around the state, and find those little donut places that you otherwise wouldn’t have driven past. Also, don’t miss taking a trip on the historic Route 66, which you can read more about above! The most common and often the best is to rent a car upon arrival in Chicago.

In Illinois there are several toll roads, and they are usually paid with electronic passes so you don’t have to stop the car. These passports are usually already in the rental cars, but ask your rental car company how it works with them.

Chicago is the largest city in Illinois and also the third largest in the United States. Chicago has a fantastic big city pulse and is a very popular destination for both domestic and foreign visitors. Chicago has a lot to offer, be it shopping, history or culture. There are more museums in Chicago than in any other city in Illinois, and the River North Gallery District is home to a very large number of art galleries. The famous Sears Tower, which has been renamed the Willis Tower, has an unparalleled view of the city.

Springfield
As the capital of Illinois, Springfield has a lot to see and discover. The city has many monuments and museums in memory of Abraham Lincoln. Among other things, you can visit Lincoln’s home, grave, office and library here. In addition to memories of Lincoln, there are also many fine parks in Springfield, the most popular of which are Carpenters Park and Washington Park. Carpenter Park consists mostly of wooded areas and there are many nice hiking trails. The park also has a golf course and many nice picnic spots. Washington Park was established at the beginning of the 20th century and many of the original features of the park remain today.

Bloomington
In central Illinois lies the pleasant town of Bloomington. The city was founded in the early 19th century, and has many fine buildings from that time preserved, even though the city was hit by a big fire in 1900. In Bloomington there are many activities for the whole family. For example, you can visit the amusement park Grady’s Family Fun Park, which has both arcades and rides. In the city there is also Miller Park Zoo with both tigers and leopards. Bloomington also has many golf courses and also an area for rock climbing.

Illinois has many large green spaces, not just inside the cities. There are several national parks and so-called “state parks” in the state that are worth a visit if you want to experience outdoor life.

The Shawnee National Forest is the most famous and well-visited national park in Illinois. Here there are ancient forests and fantastic views. One of the most incredible sights is the Garden of the Gods, a rock formation that not only offers breathtaking views of the national park, but also unparalleled sights in the form of mountains shaped in unique ways.

The Illinois Caverns in southwestern Illinois, with their fantastic stalagmites and stalactites, are also worth a visit. Another national park known for its beautiful hiking trails is Castle Rock State Park. Here, both mountains and water are close by in the form of the Rock River. In the park, there are opportunities for both rock climbing and various water sports, such as kayaking. Across the Rock River and Castle Rock State Park is the beautiful Lowden-Miller Forest, where you can both hike and bike in the beautiful surroundings. 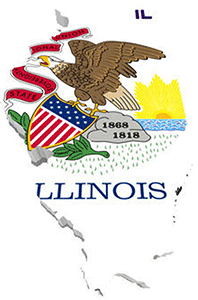