Iowa is one of the larger states in the central United States. The state is mainly known for its agriculture and a lot is grown in the state. But Iowa also has a solid history, both in terms of the Native Americans and the colonizers. There is therefore a lot of interesting things to see and discover in the state.

Things to do in Iowa

With both beautiful landscapes and pleasant cities, Iowa has something to offer no matter what you are interested in.

Des Moines
Des Moines is both the capital and largest city of Iowa, and there is much to see and do in the city. In addition to a lovely metropolitan pulse, there are also many historic buildings in the city that are worth a visit. For example, the Iowa State Capitol is a really cool building to see. There is also a fine botanical center in the city, and several very interesting museums.

Amana Colonies
Amana Colonies is a unique area that includes seven villages in central Iowa. The villages were founded by religious Germans in the middle of the 19th century and for a long time they lived very independently and isolated from the outside world. Today, the villages are open to visitors, and the old life is very much alive in Amana Colonies.

Among other things, you can visit old shops and craftsmen who work in the old way. Visiting Amana Colonies is like going back in time, and it’s a really nice experience.

Rent a car in Iowa

For the easiest way to get around Iowa, it is recommended that you rent a car. Public transport does not go to all smaller towns, and it is easier by car. In addition, it is possible to discover small donut places on the road if you drive a rental car!

You can rent a car in all major cities in Iowa, as well as at the state’s airports. The best thing is to book the car in advance before you travel, to be sure that the car is there when it is to be picked up.

There are no official national parks in Iowa, but there are several historic parks and trails that are very scenic and interesting. Among other things, you can visit the Effigy Mounds, which are very important to the Native Americans. At Effigy Mounds there is peace, and it is a very powerful feeling to stand among the great hills.

It is also possible to visit the Mormon Pioneer National Historic Trail, where you can follow the ancient route through which the Mormons fled in the 1800s. There is also a route called Lewis and Clarke, which goes through several states and follows the colonizers who first explored the American West.

Learn more about Iowa parks and trails at www.nps.gov. 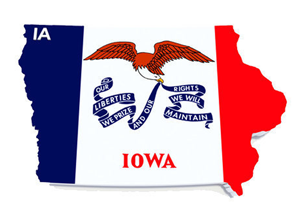