In the southern part of the USA lies the state of Louisiana, best known for its rich music scene. The state borders the coast, and has a fantastic and unique landscape with many interesting sights. Louisiana’s first colonizers were French and Spanish, and the state has an amazing mix of different cultures.

The climate in Louisiana is usually called tropical, and there are very long and hot summers in the state. There are therefore many marshlands and interesting flora and fauna.

The largest city in Louisiana is New Orleans, while the capital is Baton Rouge. New Orleans is also home to the state’s largest airport, Louis Armstrong International Airport. See cities in Louisiana by population.

Things to do in Louisiana

Louisiana has a very exciting cultural life, and is known for both its food, music and exciting nature.

Louisiana has a long history of cotton plantations where wealthy owners had slaves to work. Today it is possible to visit some of these old plantations and experience a piece of history that must not be forgotten. At Frogmore Plantation, much of the old history remains. Here, cotton is still produced in the same way as it was done 200 years ago, and the old homes where the slaves lived can be visited. At Frogmore it is also possible to pick your own cotton by hand.

Louisiana played a large role in the American Civil War, and therefore there are many interesting historical sites connected to major battles during the war. During certain times of the year, many of these types are recreated, and if you can go on one of these, you are treated to a fascinating experience. There are countless museums and monuments dedicated to the war. In Chalmette, which is located a short distance outside of New Orleans, the last major battle of the Civil War was fought. In New Orleans, there is also the state’s oldest museum, the Confederate Memorial Hall Museum, where there are many exciting exhibits.

If you instead want to discover Louisiana’s fantastic food culture, a visit to the French Quarters in New Orleans is a must. There are countless world-famous restaurants here with food from all corners of the world.

Another culinary attraction is Avery Island, where the world-famous Tabasco sauce was first created, and where it is still made today. On the island you can visit the factory, but there is also a lot of beautiful nature to discover on the island.

Renting a car in Louisiana

Renting a car in Louisiana is both simple and convenient. Large and well-known car rental companies can be found in many places in the state, and in every major city there is the possibility to rent a car. Even at the New Orleans airport, there are many rental car companies to choose from.

Keep in mind that if you are going to drive on Highway 1, which is one of the longest bridges in the world, you have to pay a toll. The same is true on the Lake Pontchartrain Causeway bridge in southern Louisiana.

With a rental car, you can get to many wonderful places in Louisiana. The state has some excellent thematic routes where there are many nice stops along the way. Among other things, the Cajun Corridor Byway is recommended, where the focus is on the state’s unique cuisine, the Zydeco Cajun Prairie Byway, where you can follow Louisiana’s many musicians and musical life, and
the Cane River National Heritage Trail, where you can experience many fascinating historical sites and beautiful landscapes.

New Orleans
New Orleans is Louisiana’s largest city, and here there is much to see and experience. Both the music and food culture thrive here, and there are many fantastic restaurants and clubs to visit. The city is home to many interesting museums, including the National World War II Museum, The Historic New Orleans Collection and the Confederate Memorial Hall which are all very well known and popular. There are also many nice green areas in the city, including a botanical garden.

Baton Rouge
In Louisiana’s capital, Baton Rouge is one of the state’s most important port cities. Baton Rouge is located right on the Mississippi River, and is Louisiana’s political center. Here there is an exciting mix of old and new, not least when it comes to the city’s buildings. In the city there are several interesting museums and art galleries, and also old plantations that can be visited. Baton Rouge is known for its museum ships, including the USS Kidd, which served in World War II.

Lafayette
Lafayette was founded in 1821 and has since become the center of Louisiana’s unique Cajun culture. Lafayette has a large and famous university, and the city has a relatively young population. Lafayette’s nightlife is widely known, but there is much more to see and do in the city and its surrounding area, which is popularly known as Acadiana. The food culture is very strong and exciting in Lafayette, and many food and music festivals are organized throughout the year in the city.

With its unique swamp landscape, Louisiana has a lot of exciting nature to offer. With its beautiful coastline, there are also beautiful beaches, which are perfect for both sunbathing and swimming.

National
Parks There are more than twenty national parks in Louisiana, all with different landscapes and nature. The Kisatchie National Forest is the only forest in Louisiana with that status, and there are many nice hiking trails and fantastic coniferous forest. In the forest there are opportunities for many different activities; it is possible, among other things, to fish and swim in the park’s waters.

Located just outside of Baton Rouge, the Atchafalaya National Wildlife Refuge is home to stunning wetlands and unique wildlife. In southern Louisiana, starting from the city of Lockport, there are opportunities to go on a tour with the special boats in the many swamps. On the tours there is the opportunity to see many interesting animals, including crocodiles.

Beaches
In Louisiana, there are a large number of pleasant beaches along the coastline. Grand Isle, located only two hours south of New Orleans, is a real paradise. Here there are mile-long white sand beaches with good opportunities for both sunbathing and swimming. During certain periods of the year, many unusual bird species also gather here.

Holly Beach is Louisisana’s answer to the French Riviera, with its beautiful houses lining the shores. The area is popularly known as the “Cajun Riviera” and also has some swamps and rivers that enhance the impression of the fantastic nature that is so unique to Louisiana.

If you feel more adventurous, a visit to Cypremort Point Beach is a must. Windsurfing is popular here, and it’s also good to fish at the fine beach.

Take a cruise from New Orleans

From the port of New Orleans Port Nola you can go on cruises to the Eastern and Western Caribbean. Experience tropical destinations and paradise islands in Mexico, Jamaica and the Bahamas. Here you can swim with dolphins in crystal clear water, sunbathe under the palm trees on a pearly white beach and take part in the rich Mayan culture. Cruises in the Caribbean island world are usually a few days to a week long, and can easily be combined with a longer pleasure trip in the United States. 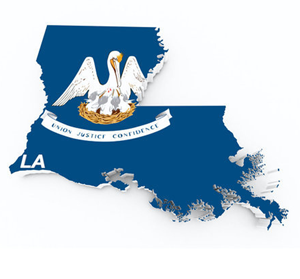