Michigan is one of the northernmost states in the United States, and is located on two peninsulas. This means that the state’s landscapes are very unique and there are also many beach areas in the state. Michigan was colonized by France as early as the 17th century, and there are many historically interesting places to see and discover in Michigan.

The capital of Michigan is Lansing, but the largest city is Detroit. See cities in Michigan by population.

Things to do in Michigan

In Michigan, beautiful nature and exciting history live side by side, and there are many attractions to visit in the state.

Mackinac Island
One of Michigan’s most beautiful and popular vacation resorts is Mackinac Island, located in Lake Huron. On the island there are several wonderful swimming beaches, natural areas and communities. The island is widely known for its amazing architecture, and it’s very nice to stroll around cozy Mackinac City. There are nice cycling and hiking trails that go around the entire island, and there are also camping opportunities along the way.

The Henry Ford
The Henry Ford is one of the finest museums in Michigan, and was founded by automobile manufacturer Henry Ford. The museum consists mostly of Ford’s personal collection of various artifacts and historically important items, and the museum has both an outdoor and an indoor section.

Among other things, you can visit Thomas Edison’s laboratory, John F. Kennedy’s limousine and the bus that Rosa Parks traveled on. The Henry Ford has collected many of the most important things from the history of the United States, and it is an amazing experience to visit the museum. Read more at www.thehenryford.org.

Traverse City
Traverse City is a very nice city in western Michigan. The town is best known for its cherry farms, and the annual National Cherry Festival celebrates the berry with pomp and circumstance, but there’s plenty more to see and do in the small town. For example, there are a large number of historical buildings in the city, and with the proximity to the sea, you are also offered fantastic views.

The Traverse City area is also home to several wineries, which produce many different types of wine. Many of these wineries are open to the public and are really nice to visit.

Rent a car in Michigan

It is a very pleasant experience to rent a car in Michigan, and it enhances the experience of the magically beautiful state. There is a bridge between the two peninsulas that make up the state, and it is therefore easy to travel between the peninsulas.

It is possible to rent a car in all major cities in the state and there are also rental car offices at the airports. The very best thing is to book the car online before departure, to simplify the collection of the car.

Most of the national parks in Michigan are located around the coast, and there are very dramatic landscapes with breathtaking views to visit there. Among the most famous national parks are Sleeping Bear Dunes, which are incomparably beautiful beaches and clear waters, and Pictured Rocks. Pictured Rocks has a fantastic landscape with different colored sandstones. There are also kilometer-long beaches and fantastic water.

There are also a couple of historic parks in Michigan, each with a different theme. For example, Motor Cities in Detroit, which focuses on the state’s famous car production, and Keweenaw, where copper was mined in the past.

Learn more about the various national parks in Michigan at ww.nps.gov. 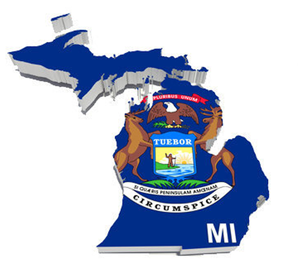