Mississippi is the state that often calls itself the birthplace of American music. Elvis Presley was born in the small state in the southern United States, and the state has a strong musical tradition mixed with unique nature.

The largest city of Mississippi is Jackson, and the capital is also Jackson. See cities in Mississippi by population.

Things to do in Mississippi

Biloxi
One of the top tourist destinations in Mississippi is Biloxi. The city is right on the coast, and here there are very nice beaches where you can both sunbathe and swim. Biloxi is also known for its casinos, and it is a fast-paced city with a rich nightlife. There are also several historical attractions in the city, including several houses from the 19th century.

Jackson
Jackson is both the capital and largest city in Mississippi. Jackson is perhaps best known for its rich musical life, and several world-renowned musicians in the blues and jazz genres have begun their musical careers in the city. In Jackson there are many historic buildings to visit. Among other things, the Mississippi State Capitol and the Eudora Welty House Museum are two popular attractions. There are also several very nice parks in the city.

Shiloh
One of the biggest battles during the American Civil War took place in Shiloh, and today there is an exciting and interesting military history park in the area. In the park, there are several monuments commemorating the soldiers who died in the battle, and it is an educational experience to visit Shiloh. There is also the option of guided tours in the park to get the most out of the visit. Read more at www.nps.gov

Rent a car in Mississippi

Renting a car in Mississippi is a very good idea if you want to get the most out of your vacation in the state. Thanks to the state’s size, it is easy to get to the various parts by car, and it is also possible to drive to more difficult-to-reach places with a rental car. It is possible to pick up and rent a car in all major cities in Mississippi, and also at the airports. It is recommended to reserve the car online in advance.

Mississippi has a very varied landscape, with swamps, mountains and a stunning coastline. There is simply something for everyone in the state!

If you want to experience real outdoor life with hiking and breathtaking nature, a visit to the Natchez Trace is a must. The Natchez Trace is a route that takes one on a journey through both time and different environments. The route was used for several centuries and is very beautiful to walk on.

Beaches in Mississippi
Mississippi has a fantastic coastline with many wonderful beaches and lots of sun and swimming. On the coast are the Gulf Islands National Seashores, which are a number of islands with unparalleled beaches. Here, the sand is white and the water is crystal clear, and there are good opportunities for several outdoor activities, such as diving and surfing. Gulf Islands National Seashores is a true vacation paradise that simply must be experienced! 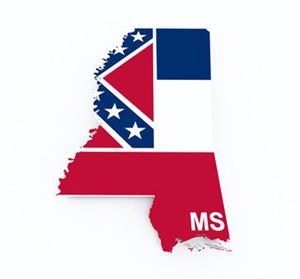