In the northeastern part of the United States lies the small state of New Hampshire. New Hampshire is one of the smallest states in the country both in terms of surface area and population, but there is still much to see and discover in the state. For example, there is a very rich history in the state, as it is one of the oldest of the United States.

The landscape of New Hampshire is mountainous and during the winter months skiing is one of the main tourist attractions and during the summer the fine beaches attract many visitors. The state’s largest city is Manchester and the capital is Concord. See cities in New Hampshire by population.

Things to do in New Hampshire

In New Hampshire there is a wonderful mix of fantastic landscapes, mountains and beautiful sandy beaches, while the state’s rich history means that there are also many interesting museums and buildings to visit.

Concord
Concord is one of the oldest towns in New Hampshire, so there is much to see in the town. The New Hampshire State House, for example, is one of the oldest state houses in the entire country, and is still in use today. On Main Street there are several buildings, hotels and restaurants visited by prominent American people, such as Abraham Lincoln, Richard Nixon and Theodore Roosevelt.

Concord also has many nice museums, such as the Capitol Center for the Arts, the New Hampshire Historical Society and the McAuliffe-Shepard Discovery Center planetarium.

Hampton Beach
One of the most famous places in New Hampshire is Hampton Beach, which during the summer months attracts many sun worshipers and swimming enthusiasts. Hampton Beach is a beach resort of a very high standard, and the water is one of the best in the entire country. In Hampton Beach there is also a picturesque promenade with shops and restaurants.

Wildcat Mountain
One of the best and most popular ski resorts in New Hampshire is Wildcat Mountain. Here there are close to 50 different ski slopes of varying degrees of difficulty, and the landscape around the mountain is absolutely incomparably beautiful. Even in the summer, Wildcat Mountain offers exciting adventures, including a cable car that takes you up to the top and its breathtaking views. The mountain also has a cool zipline, i.e. a cable car where you hang in a harness, where you can go down the mountain. It is a completely unique experience, and not for those afraid of heights!

Rent a car in New Hampshire

Since New Hampshire is such a small state, it’s perfect to explore the area with a rental car. With a rental car, it is both quick and easy to get around to different cities and attractions. There are several fantastically beautiful roads that take you through incomparable nature and historical places. Learn more about these scenic routes at www.visitnh.gov.

It is possible to rent a car at all airports and in the major cities in New Hampshire. Please note that it is recommended to book the rental car in advance before departure, to be sure that it is available. 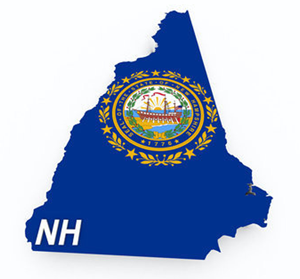