A short distance outside the world metropolis of New York lies the state of New Jersey. It is the fourth smallest state in the entire United States, but at the same time has the most inhabitants per square meter of any state. New Jersey is therefore an exciting mix of small and large, and there is much to experience in the state, which is also known as “The Garden State”.

In New Jersey there is much to see and experience, with both big city pulse and history close by. The state was colonized in the early 17th century by the Dutch and Swedes, but was later taken over by the English. Many historic buildings still stand, and during the American Revolution the state played a major role. Trenton is the capital of New Jersey, but the largest city is Newark, where Newark Airport is also located. See cities in New Jersey by population.

Things to do in New Jersey

New Jersey may be a small state, but many famous people have lived and worked here. Many important historical events have also taken place in the state, and there is therefore much to see and do there.

There are, for example, several parks that have been built around famous battlefields. One of the most famous is in Princeton, where one of the USA’s most prestigious universities is also located. In these “Battlefield State Parks” there are large and beautiful green areas and monuments commemorating the battle.

A real trip back in time is offered during a visit to Allaire State Park. The park is located in southern New Jersey, and includes a preserved 19th-century village, Allaire Village. In the village, you can experience life as it was during the early 1800s, and there is, among other things, a hardware store, carpentry and an old church that can be visited. Several markets and other activities are arranged here every year, all in the spirit of the 19th century.

New Jersey is also known for its many industries and technological inventions. It was, for example, in New Jersey that the industrial revolution got a real boost, and the world-famous inventor Thomas Edison worked in Newark, among other places. In West Orange there is the Thomas Edison National Historical Park, where it is possible to visit the building where Edison both lived and had his laboratories. In Edison, the town named after the inventor, there is a large museum dedicated to Thomas Edison.

Rent a car in New Jersey

If you want to experience New Jersey and its surrounding areas, a rental car is the perfect means of transportation. You can rent a car in all major cities in New Jersey, and the rental car companies are easy to get to. It is also possible to rent a car at the airport you arrive at, if you so wish.

There are a number of toll roads in New Jersey, as the state’s roads are relatively heavily traveled due to its location near New York. Most of the roads do not have manned toll booths, but the toll is paid through an electronic passport. These are often already installed in rental cars in the state. Check with your rental car company for exact details regarding this.

Newark
Newark is New Jersey’s largest city, and is close to New York. The city is less busy than New York but still has a great metropolitan pulse. Here there are very good opportunities for good shopping, but also many historic buildings can be visited. Newark also has many beautiful parks, the oldest and largest of which is Branch Brook Park, which is widely known for its amazing cherry trees. The park has the most planted cherry trees in the entire United States, and during the blooming season, a special festival is held in the park dedicated to the beautiful cherry blossoms on the trees.

Trenton
Trenton is the capital of New Jersey, and there are many attractions to visit here. The city is located in the western part of New Jersey and very close to the Delaware River. Historically, the city is very important, as it was here that George Washington won his first battle. The city therefore has a lot of history to look at. Among other things, there are a couple of old barracks that were used in the American Revolution and the state’s official museum.

Cape May
One of the true gems of New Jersey is Cape May. In the fantastic coastal resort there are both cozy streets and long beaches. The city has a very long tradition as a holiday resort and the many Victorian houses offer a spectacular city centre. The beaches in Cape May have been voted some of the best in the entire United States, and are definitely worth a visit if you’re in the mood for sun and swimming.

New Jersey is known as The Garden State, and the many parks and green spaces in the state certainly justify the name. The proximity to the sea also means that there are many beautiful beaches that are perfect for sunbathing and swimming. New Jersey also has a lot of historic national parks, where nature mixes with historical context.

Parks in New Jersey
One of the most famous historic national parks in New Jersey is Paterson Great Falls, which is a waterfall that was used to provide hydropower for industries in the nearby city. The area has fantastic views of the mighty waterfall, and there is even an old bridge that you can walk across.

The Great Swamp National Wildlife Refuge has many hiking trails and exhibits about the endangered wildlife that is allowed to thrive inside the preserve. It is particularly famous for its many bird species, and there are also lookouts in the area.

The Great Egg Harbor River is a scenic route with many beautiful views of the river. Another park is Round Valley Recreation, which offers both relaxation and very nice hiking trails by the fantastic lake. In northern New Jersey there are several mountainous areas that have irresistible nature and exciting hiking trails. Of these, Wawayanda State Park, High Point State Park, and Delaware Water Gap National Recreation Area are some of the most popular to visit.

Beaches in New Jersey
In New Jersey, the coast is always close, and there are countless beaches for sunbathing and swimming. The most famous is located at Cape May, and has been named one of the best beaches in the United States. The entire New Jersey coastline is bordered by fine beach resorts and beaches, and the stretch is usually called the Jersey Shore.

Spring Lake has a fantastic strip of beach with both fine sand and a fantastic walkway along the beach. The town also has many picturesque houses and beautiful buildings that frame the pleasant coastal town. Seaside Heights also has wonderful beaches, but also two piers where one houses a casino and the other an amusement park.

Long Beach Island is one of New Jersey’s most popular beach resorts. The island is surrounded by sandy beaches, and in the summer many city dwellers come there to sunbathe and swim. Long Island Beach also has a historic lighthouse that is open to the public. 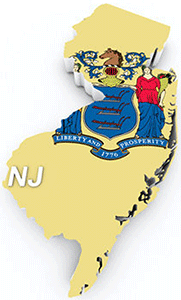