In the southern United States, right on the border with Mexico, lies the relatively young state of New Mexico. New Mexico was admitted to the United States in 1912, and is by surface area the fifth largest state in the country. But it is also one of the states with the fewest inhabitants, which can be explained by the terrain that is difficult to build on.

In New Mexico there is a lot of fantastic nature, and the state is usually counted as one of “the mountain states”. The capital of New Mexico is called Santa Fe, while the largest city is Albuquerque. See cities in New Mexico by population.

Things to do in New Mexico

New Mexico has great scenery, but with its rich Native American history, there’s also plenty of history to discover in the great state.

Taos
In central New Mexico is the pleasant town of Taos, which is close to both nature and history. The city includes the Taos Downtown Historic District with many old buildings and shops, and Taos is also known for its many art galleries and local artists.

During the winter season, Taos turns into a ski resort with four major ski areas: Taos Ski Valley, Red River, Sipapu and Angel Fire. The ski resorts and slopes in the area are incredibly beautiful and widely known, and Taos also has the highest peak in all of New Mexico.

White Sands National Monument
One of the most amazing experiences in New Mexico is White Sands National Monument, which is a unique desert of gypsum sand. The desert spreads over a huge area, and is the largest of its kind in the entire world. Due to the fact that the sand is made of gypsum, it has a chalky white color, and there is nothing like it in the whole world.

There are opportunities to both drive and hike through the desert, and there are several nice hiking trails and routes that lead one through the incomparable landscape.

Carlsbad Caverns National Park
In the southeastern parts of New Mexico is one of the state’s top attractions, Carlsbad Caverns. The cave is one of 119 naturally formed caves in the limestone rock, and the only one open to the public, and is one of the largest of its kind in the entire United States.

At its highest, the cave is 78 meters high, and it is a fantastic experience to visit it. In the cave there are a large number of smaller caves, each with its own characteristics. It is possible to go on guided tours of the cave system, and there is also a nice visitor center with a cafeteria there.

Rent a car in New Mexico

Due to its large size, it is a very good idea to rent a car in New Mexico to be able to get around to the different parts. Taking public transport in the state can take a very long time, while by car it is both quick and easy to get around the state.

You can rent a car in all major cities in New Mexico, and also at the state’s airports. There are many pleasant driving routes to drive to make the most of the unparalleled scenery of New Mexico. Read more about these on the official tourism site www.newmexico.org. 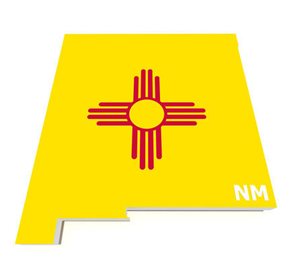