North Carolina has a rich history and there are many historic attractions in the old state. North Carolina is located on the east coast of the United States and has a very nice coastal strip with many popular beaches. In the state there are also fantastic Smoky Mountains, and several interesting and pleasant cities.

The largest city is Charlotte, and the state capital is Raleigh. See cities in North Carolina by population.

Things to do in North Carolina

There is a lot to see and experience in North Carolina, regardless of whether you are interested in history or want to sun and swim.

Biltmore Estate
One of the most famous attractions in North Carolina is the Biltmore Estate, which is the largest of its kind in the entire United States. Here there are fantastic surroundings with an incredibly large and old garden, and the house has over 250 rooms furnished in original style. There are also several interesting exhibitions to visit.

Biltmore Estate also has a well-known vineyard and opportunities for several activities on the grounds of the estate. There is truly something for everyone at the estate, and a visit to the Biltmore Estate is a true journey back in time. Read more at www.biltmore.com.

Charlotte
Charlotte is North Carolina’s largest city and has a lively metropolitan life. But the city also has many pleasant sights, many of which have a historical background. Among other things, there are several fantastic museums in the city, such as the Bechtler Museum of Modern Art and Historic Rosedale Plantation. Charlotte is also known for its auto racing culture, and you can visit the NASCAR Hall of Fame in the city.

Charlotte has several breweries open to the public, and both large and small beer producers are based in the city. There is also the opportunity for good shopping in Charlotte, with many outlets and shopping centers.

Outer Banks
North Carolina’s Outer Banks are part of the state’s fine coastal strip, and stretch over a very large area. The Outer Banks consists of several different beaches and towns, and there is much to see and discover in the region. For example, there are opportunities to practice many different types of outdoor sports, such as wakeboarding or sailing, and it is also good to sunbathe and swim on the many beaches.

In the Outer Banks there are also several exciting lighthouses, including the Currituck Beach Light, which are both beautiful and provide an incomparable view of the coast. Read more about the Outer Banks region on North Carolina’s official tourism site.

Rent a car in North Carolina

To get the most out of your North Carolina vacation, it’s a good idea to rent a car. It can be difficult to get to smaller places with public transport, and with a rental car the journeys are both easier and smoother, and it also becomes more fun to discover smaller places that you would not otherwise have seen.

In North Carolina, the rental car companies are in all major cities, and they are also of course represented at the state’s airports. If you wish to rent a car during the trip, it is recommended to book the car in advance, to get the best price.

There are several nice national parks and wonderful beaches in North Carolina. For example, the Great Smoky Mountains National Park is one of the coolest nature experiences in the state, with its magnificent mountains and unparalleled scenery. Here you can find everything from beautiful hiking trails and exciting historical elements.

If you want to discover North Carolina’s fantastic coastline, a visit to the Crystal Coast is a must. The region is home to several wonderful beaches with perfect opportunities for swimming and relaxation. The Crystal Coast also has several famous and beautiful lighthouses that can be visited, and the towns in the region are very pleasant to visit. 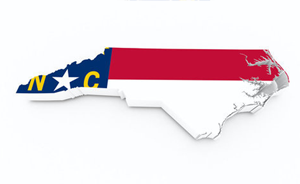