In the north of the United States, right on the border with Canada, is the state of North Dakota. With its long landscapes and famous nature, North Dakota is a feast for the eyes and a perfect destination for the outdoor enthusiast.

Things to do in North Dakota

In North Dakota there is a wonderful mix of history, big city and incomparable nature.

Bismark
Bismark is North Dakota’s second largest city after Fargo, but has the role of the state capital. In recent years, the city has grown at record speed, and today there is much to see and do in the city. Bismark has, among other things, a widespread cultural life, with several theater companies and art galleries. Bismark also has a large number of beautiful green areas and parks.

A short distance outside the city center is also the city’s main tourist attraction, Fort Abraham Lincoln. The fortress is partially reconstructed and was of great importance in the Battle of The Little Big Horn in the 19th century. The fortress is located in a large park, and there are several hiking trails and also other reconstructed historical buildings can be visited in the park. There is also a museum and several exhibitions for those who want to learn more about the historical significance of the area.

Bonanzaville
One of the largest and most visited museums in North Dakota is Bonanzaville, which is located a little outside of Fargo. Bonanzaville is a large open-air museum complex, with about fifty historic buildings on nearly 50,000 square meters. The buildings show the development and history of the colonization of the western United States, and each building in the museum village has a unique theme that brings to life life during the pioneer era and up to the present day. The museum is a perfect excursion destination for the whole family, and there are also some plays in the village.

Because of its large size and many expansive landscapes, the best means of transportation in North Dakota is a rental car. With a rental car, you can travel around the state on your own terms, and it will also be easier and more convenient to get to the different parts of the state. There are several nice scenic routes specially designed to provide as awesome a driving experience as possible.

It is recommended to rent the car online in advance to simplify the pick-up. A good idea is also to opt for GPS, to make the trip even smoother. 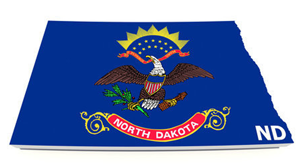