Rhode Island in the northeastern United States is the smallest state in the country. But despite its size, there is plenty to see and do here. Rhode Island has had an enormously important role in American history, as it was the first of the colonies to renounce the power of the British crown.

Rhode Island’s location on the coast also means that there is a lot of beautiful nature there, and the state is known as a little vacation paradise for big city people.

Things to do in Rhode Island

There is much to do for the outdoor enthusiast in Rhode Island. For example, there are opportunities for surfing, windsurfing and kayaking and canoeing in many different places in Rhode Island. It is also possible to take courses in surfing and other water sports in several places. Among other things, on Block Island, where it provides lessons for all ages and levels of difficulty.

Something that Rhode Island is known for is its many beautiful lighthouses. They are located on the state’s beautiful coast, and are very popular attractions. Some of the most famous and popular lighthouses are Beavertail Light in Jamestown, North Lighthouse on Block Island, Point Judith Lighthouse in Narragansett, and Castle Hill Lighthouse in Newport.

If you are interested in wine production, there are several vineyards in the state. Around Newport are three of the largest wineries in Rhode Island, and they are all open to the public. With these winegrowers there is the possibility of guided tours and tastings of the products. There are also several breweries and distilleries in Rhode Island.

Rent a car in Rhode Island

The very best way to discover little Rhode Island is by rental car. Thanks to the short distances in the state, it is easy to get to different parts in a short time. It is possible to rent a car in all major cities in Rhode Island, and also at the various airports in the state.

There is only one toll road in Rhode Island, and that is the Newport-Pell Bridge. It is fine to pay the fee in cash, and the cost is small.

Providence
Providence is the largest city in Rhode Island. It is also one of the oldest cities in the entire United States, and therefore also one of the most historically interesting and beautiful cities in the state. There is an incredible amount to see and discover here. Some of the most famous sights in the city are located in the area known as the East Side. There is, among other things, the first Baptist church in the United States, and the old town hall.

Providence is known for its many and large parks, which are very beautiful and well visited. Two of the most popular parks are Waterplace Park and Roger Williams Park, both of which are very pleasant to visit.

Newport
Newport is Rhode Island’s major resort town, and many big-city people and other Rhode Islanders tend to spend their summers here. The city has a fantastic environment, and there are several nice beaches and marinas. There are also many good opportunities for sailing in Newport, as the area has very good water for this particular sport. Newport is also often called America’s foremost sailing city and annually organizes several well-known sailing competitions.

In Newport there are also many beautiful and historic buildings. Newport has the most colonial-era buildings than any other city in the entire United States.

Narragansett
In southern Rohde Island is the interesting town of Narragansett. In the summer, the city is a real holiday paradise with beautiful beaches and many shops and restaurants. But the city is also worth a visit in terms of historical experiences. Among other things, in Narragansett you can visit the Central Street Historic District, with its many small and pleasant wooden houses. The city’s most famous landmark, however, is The Towers, which used to be a casino, but today is an attraction and entertainment venue.

Despite its small size, Rhode Island has a lot of beautiful nature. With its proximity to the water and many bays, there are many incredibly beautiful views and beaches.

Parks in Rhode Island
Rhode Island does not have many national parks, but there are many nice and exciting historical parks and areas. The Blackstone River Valley is one of these, and it was on this river that runs along Providence, among others, that the industrial revolution made its breakthrough. Along the river there are very beautiful views and also some historical places that you can stop at.

In Providence there is also the incredibly beautiful Roger Williams Park, which is a park in tribute to the city’s founder of the same name. There are both verdant parkland and fantastic historical features here.

Beaches in Rhode Island
Some of the best beaches in Rhode Island can be found on the state’s absolute southern coastline, and especially in the Newport area. Here there are a large number of fantastic sandy beaches with incredibly wonderful bathing opportunities. For example, you can visit Gooseberry Beach and Easton’s Beach, which are the two most popular beaches in the area.

Also in southwestern Rhode Island there is a fantastic coast with many beaches. Misquamicut Beach, East Matunuck State Beach and East Beach in Charlestown are some of the finest beaches on the southwest coast, and all worth a visit if you’re in the mood for great sun and swimming. 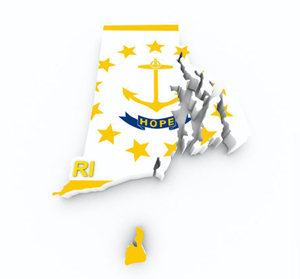