South Dakota is located in the north-central part of the United States, and has many dramatic landscapes. There are a large number of national parks in the state, so there is a lot to see and discover in South Dakota. The state is known for its agriculture, and many different crops are grown in the fertile soil.

The most famous landmark in South Dakota is undoubtedly Mount Rushmore, which has also given the state the nickname The Mount Rushmore State. The capital is Pierre, and the largest city is Sioux Falls. See cities in South Dakota by population. The area has been inhabited by aboriginal people for thousands of years, and therefore has a lot of history.

Things to do in South Dakota

South Dakota’s incomparable nature means that there are an incredible number of beautiful views and landscapes to view. But there is also a lot of history in the state, and also some big city life in Sioux Falls.

Mount Rushmore By
far the most famous landmark in South Dakota is Mount Rushmore, located in the beautiful area of ​​the Black Hills. Four of America’s most famous presidents are carved into the rock, and each face is over 18 meters high. It is a very cool experience to visit Mount Rushmore, and the monument attracts millions of tourists every year. The area around Mount Rushmore is also very beautiful, and there are several nice hiking trails there.

Sioux Falls
Sioux Falls is South Dakota’s largest city, and is named after the many beautiful waterfalls created in the Big Sioux River during the Ice Age. The city has a long history, and there are several famous historic districts and neighborhoods in Sioux Falls.

Sioux Falls is known for its many art galleries and museums, and there are a large number of public sculptures in the city. Some of the most well-visited museums are the Washington Pavilion and The Great Plains Zoo & Delbridge Museum. Around the city you can visit several nice parks and green areas, and there are good opportunities for both shopping and good food.

The Badlands have been used by the military, especially during the Cold War, and there are several historic sites within the national park that can be visited. Among other things, there is the Minuteman Missile National Historic Site, which was created in 1999 to commemorate the readiness that the United States stood in during the Cold War.

Rent a car in South Dakota

Without a doubt, the best way to get around South Dakota is to rent a car. With a rental car, it is easy and quick to get to different parts of the large state, and you really get the most out of your vacation with the help of a rental car. In addition to enhancing the experience of discovering the fantastic nature, it creates many opportunities to find nice places that would otherwise have been overlooked.

You can rent a car in all major cities in South Dakota, and also at the airports. 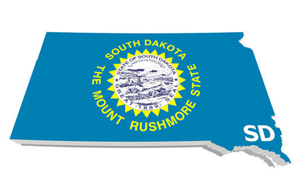