Virginia is located on the east coast of the United States and is one of the oldest states in the country. There are therefore many historically interesting places and attractions in the state, which is the twelfth largest in the United States in terms of population. Virginia long belonged to the English crown, and was for a very long time one of the most important political seats in the United States. It is because of belonging to England that the state has been given the nickname “Old Dominion”.

In Virginia there is a lot of beautiful nature in the form of mountains and forests, and the small coastal strip offers many beautiful views and beaches.

Things to do in Virginia

With its rich history as America’s first state, Virginia has much to see and discover. Among other things, there are several famous battlefields in the state, as well as many museums and historic towns. One of the most famous cities is Williamsburg, which is a kind of interactive open-air museum, where you can visit the city as it looked in the 18th century.

Many pleasant tours are organized here with people dressed in period clothes, and it is also possible to visit homes as they looked during the time of the American Revolution. In Williamsburg there is also the Busch Gardens amusement park, with many fun and exciting rides. There is simply plenty to do and see in Williamsburg for the whole family.

Virginia is home to many fine wineries, breweries and distilleries, and they are often open to public visits. There are many routes with the theme of vineyards, where you are taken on a journey between many fine wineries. These routes are best suited with a rental car, which you can read more about below. Some of the most popular wineries in Virginia are Oasis Winery, Prince Michel and Barboursville Wineyards. For more information on the many wineries, breweries and distilleries in Virginia, see the state’s official website here.

The most famous of the many American presidents who lived and worked in Virginia is George Washington. Even today it is possible to visit the place where he lived in Mount Vernon. Washington’s place in Mount Vernon consists of a majestic house that served as a plantation in its heyday. The house includes a large piece of land with a couple of very beautiful gardens and a farm with several unique animal species. In the house in Mount Vernon, Washington and his wife are also buried, and it is possible to visit their mausoleum.

Renting a car in Virginia

Renting a car in Virginia opens many doors when it comes to enjoyable day trips in the state. It’s easy to rent a car in Virginia, and all major cities have options for both rental and pickup of cars. It is also possible to rent and pick up rental cars at the state’s airports. It is recommended to book the car online in advance, to guarantee its availability. Read about tips and advice for renting a car in the USA here.

In Virginia, there are several nice routes specially designed for road trips. The routes most famous for their unparalleled views are the Skyline Drive that runs through Shenandoah National Park. There are many places to stop here, several of which are historically interesting places. Even the Blur Ridge Parkway takes you through unparalleled nature, and passes, among other things, the Appalachian Mountains and some of the oldest settlements in the area.

Richmond
Richmond is the fourth largest city in Virginia, but also the state capital. There is plenty to see and do in Richmond for the whole family. There are several interesting museums here, with the Science Museum of Virginia and the Edgar Allen Poe Museum being among the most famous. The city has several nice parks, and the Lewis Glinter Botanical Garden has many parts designed for the whole family. Richmond is famous for its artists and in many places in the city there are beautiful murals that appeared as part of an artist project started by the city.

Virginia Beach
On Virginia’s coastal strip is the rapidly growing city of Virginia Beach. The city has many fantastic beaches and is a real holiday paradise during the summers. In addition to sun and swimming, there are also great opportunities for many outdoor activities, such as surfing. Virginia Beach is a must for nature lovers with its miles of sandy beaches and over 200 public parks.

Washington DC
Washington DC does not officially belong to an American state, but the city is right between Virginia and Maryland, which makes it a perfect excursion destination if you are visiting one of the states. Washington DC is an exciting city with many attractions. Everywhere you go in the city there is something to see: the Lincoln Memorial, the United States Capitol, the Smithsonian Institution and of course the White House are all within walking distance and are some of America’s top landmarks.

Parks in Virginia
There are many nice and scenic national parks in Virginia. With the large mountain ranges of the Blue Ridge Mountains and the Appalachian Mountains covering much of the southern part of the state, many beautiful park areas have been created.

Among other things, the Appalachian National Scenery Trail is one of the most popular hiking trails. There are ancient forests and breathtaking views, and the hiking trails are in very good condition. There are also some historical sights and places to stop on the trail.

The Cumberland Gap marks a very important historical site where the Native Americans, the first colonizers and settlers made their way from Virginia to the interior of the continent. Through the Cumberland Gap you get to Kentucky, and here also in the olden days buffalo wandered back and forth. In the area there are also fantastic caves, as big as cathedrals.

Beaches in Virginia
Virginia has a fantastic stretch of coastline when it comes to beaches. In addition to Virginia Beach, which you can read more about above, there are several fantastic sandy beaches in the state.

One of the most famous and pleasant coastal towns with beautiful beaches is Chincoteague, which is located on an island just off the coast of Virginia. Every part of the island is lined with unparalleled sandy beaches, and there are also opportunities for windsurfing and other activities. Even Sandbridge with its Sandbridge Beach is widely known to be a summer paradise, and in total the beach is seven kilometers long. 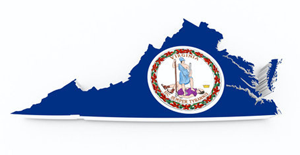