Washington is known for its amazing nature. The state has, among other things, fjords, mountains, deep forests and more glaciers than in all other states combined. Forestry plays a major role in Washington, but it is also where most apples are grown in the entire United States and many other fruits and berries are also produced in large quantities in the state.

The capital of Washington is called Olympia, while the largest city is Seattle. See cities in Washington by population. Seattle is the fastest growing city in the entire United States and many large, international companies have their bases here. There is also the area’s largest airport, Seattle-Tacoma.

Things to do in Washington

Amazing nature, historic buildings and modern big cities are all part of Washington’s interesting landscape. There is a lot to see and experience here for the whole family, regardless of whether you are looking for outdoor life and dizzying views or big city pulse and shopping.

Known for its large fruit production, Washington has many orchards that are open to the public. These often have many pleasant activities and historical sights. In the area around the cozy town of Snohomish, which is known for its many antique shops and historic buildings, there are many farms and farms that can be visited.

In the theme park The Farm at Swan’s Trail there is an enormous amount to do and experience for the whole family. Here there are, among other things, animals, a hay loft that you can jump into and the opportunity to pick your own apples. In the park, you can also get through a huge maze created in a cornfield, which is structured like the state of Washington with both roads and cities.

If you want to get a better insight into Washington’s history and role in the American Civil War, a visit to the Fort Walla Walla museum is a must. Here you can see many fine exhibitions about life in Washington for the first colonizers. The museum also has a small village with buildings from the late 19th century, where you can experience how everyday life was for the people of Walla Walla.

Rent a car in Washington

The easiest way to get around Washington is by car. Rental cars can be picked up in all major cities in the state and at the airports. With a rental car, it becomes easier to get around to different parts of Washington that would otherwise be very difficult to access.

There are a couple of toll roads in Washington. Payment is made through electronic passports, and many of the rental car companies already have these installed in their rental cars. Check with your rental car company what applies to you.

Seattle
Seattle is Washington’s largest city, and the best city to go to in the area if you want to experience the pulse of the big city. The city’s location by the sea also makes it a scenic city, and there are many nice parks to visit. Among other things, Myrtle Edwards Park right on the coastline is a great place, and Golden Gardens Park has many beautiful views and places. The most famous landmark in Seattle is the Space Needle, which is an observation deck with incredible views. In Seattle, you can also visit the world’s first Starbucks and the exciting EMP museum with its fascinating exhibits on various popular cultural phenomena.

Olympia
If you are interested in art and culture, a visit to Washington’s capital, Olympia, is a must. The city is widely known for its many art galleries and museums. Public art can be found on almost every street corner and it is very popular to display works in local cafes and smaller venues. Even in the city’s parks, the cultural spirit is present. In perhaps Olympia’s most historic park, Percival Landing Park, in addition to many beautiful views and a marina, there are also many famous statues and sculptures.

Spokane
Spokane is Washington’s second-largest city with its 200,000 inhabitants. The city was populated around 8000 years ago, and therefore has a lot of historical value. In Spokane, you can visit many nice museums, focused on art and technology, among other things. There are also a lot of historically interesting buildings to visit, for example in the Riverside and Hillyard districts.

Take a cruise from Seattle to Alaska

From the Port of Seattle, you can go on a stunningly beautiful cruise along the coast to Alaska and Canada. The cruise often takes a week and can easily be combined with a larger trip. Shipping companies departing from Seattle run various routes at lovely places like Juneau, Skagway, Ketchikan and Vicoria, British Columbia before turning back to Seattle.

On a cruise you can experience sparkling glaciers, mighty fjord landscapes and go whale watching. There’s no better way to see the great, wild nature of the northern states!

With its stunningly dramatic scenery, Washington has a large number of national parks to visit. The state also has long stretches of beach with bathing facilities.

Parks in Washington
One of the most scenic national parks in Washington is the Okanogan-Wenatchee National Forest, which with its mix of ancient forest, majestic mountains and clear lakes offers a fantastic experience. From the Goat Peak viewpoint, you get an incomparable view of the mountainous area.

Mount Baker-Snoqualmie National Forest, with its many glaciers and snow-covered areas, is a very popular excursion destination. In the area you can both hike and climb the many high mountains, and there are also good opportunities for many other outdoor activities.

A little outside of Olympia is one of Washington’s most popular national parks, Olympic National Park. The park is unique with its mix of rainforest, beaches, deciduous forests and alpine mountains. There is an incredible amount to see and do here, and every part of the park offers unique and interesting experiences.

Beaches in Washington
With its incredibly beautiful coastline, there are many beautiful beaches in Washington. Nearby in Seattle is the popular Alki Beach, which has great sand and a boardwalk lined with restaurants and shops. On the San Juan Islands there are also many incredibly beautiful beaches that surround the islands. Among other things, you can visit South Beach, which has been named one of the best beaches in the entire United States.

In Olympic National Park there are a number of beaches to choose from. Here, however, the beaches are a bit rougher and tougher than Alki Beach and those on the San Juan Islands. Some of the finest beaches in the park are Rialto Beach, Second Beach and Third Beach. 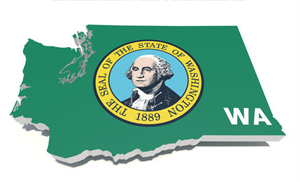