The state of Wisconsin is located in the northern part of the United States, almost on the border with Canada. The state borders two of the largest lakes in the country, and therefore has, in addition to fine rural landscapes, also pleasant environments on the lake coast. Wisconsin is famous for its widespread agriculture, and it is where the most milk is produced in the entire United States.

Wisconsin’s largest city is Milwaukee, while the capital is Madison. See cities in Wisconsin by population.

Things to do in Wisconsin

Wisconsin has a lot to offer its visitors. From beautiful scenery to historic towns and exciting adventures, Wisconsin has something for everyone!

House on the Rock
One of the main and most popular attractions in Wisconsin is the House on the Rock. It’s what it’s called: a house on a cliff, but once inside it’s so much more than just a house. House on the Rock was built by visionary Alex Jordan in the 50s, after years of planning.

The house is huge and houses several collections of odd things from all over the world. The rooms are intricately decorated and are a real experience to visit. The area around the house is also absolutely fantastic, with a beautiful garden and several other exciting buildings. One of the most unique features of House on the Rock is the so-called “infinity room”, which stretches 66 meters out over the edge of the cliff without any support and has 3,000 windows.

Milwaukee
Milwaukee is Wisconsin’s largest city and also one of the oldest cities in the state. The city was founded at the beginning of the 19th century, and still has many historic buildings from this time. Among other things is the historic Third Ward, which is home to many nice local shops and restaurants, and also art galleries.

In addition to the many pleasant historical parts of Milwaukee, the city also has a large number of breweries, both large and small, that can be visited. The city’s location by Lake Michigan also means that there are many nice walks by the harbor and during the summer months there are good opportunities for sailing. You can read more about Milwaukee on the official tourist page.

Mt. Olympus has both many rides and a well-visited water park. The theme of the park is Greek mythology, and there is, among other things, a large Trojan horse that you can drive a go-kart around.

Rent a car in Wisconsin

For the easiest way to get around Wisconsin, it is recommended to rent a car. With a rental car, it is easy to get to different parts of the state, where public transport does not reach. It is possible to rent a car in all the major cities in Wisconsin, and even at the state’s airports the rental car companies are represented.

It is recommended to book your rental car in advance online, to get the best price and to be sure that the right car is available at the time of pick-up. It is also recommended to add a GPS, as many of the roads in Wisconsin can be both small and remote.

Wisconsin has several beautiful parks to visit. Among other things, the forests of the Chequamegon-Nicolet National Forest are some of the most beautiful in the region and have many fine hiking trails and opportunities for camping and even skiing when the weather permits.

Thanks to Wisconsin’s location on Lake Michigan, there are several wonderful coastal areas and even beaches suitable for swimming. In addition to beautiful beach areas, Frog Bay Tribal National Park also has incomparable scenery and opportunities for both hiking and skiing.

In northern Wisconsin is the fantastic Apostle Islands National Lakeshore, which in addition to beautiful beaches also has incredible and unique cave formations and many historical landmarks in the form of lighthouses. You can read more at www.nps.com. 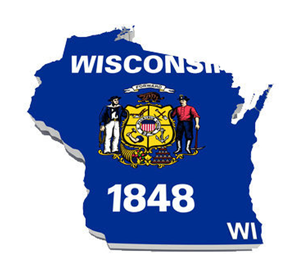