The term allergic conjunctivitis describes the inflammation of the conjunctiva of the eye. The conjunctiva (conjunctiva) is the mucous membrane that rests on the eyeball.

What is allergic conjunctivitis?

The term allergic conjunctivitis describes the inflammation of the conjunctiva of the eye.

The allergic conjunctivitis is common. It is estimated that around 20 percent of the population is affected.

Itching, red eyes, discharge from the nose, and the urge to sneeze are some of the symptoms that plague sufferers of allergic conjunctivitis. The most common trigger is a pollen allergy . In the treatment, antiallergic eye drops are mostly used.

Many substances can irritate the conjunctiva. This includes cosmetics , pet hair ( cat allergy ) and medication.

Eye drops or ointments and the preservative solutions for contact lenses should also be considered as causes. Most often, however, conjunctivitis manifests itself as a result of an allergy to pollen. Seasonal allergic conjunctivitis and allergic rhinoconjunctivitis are also used here, as the symptoms appear depending on the time of year.

Usually the nose is also affected. If the symptoms persist all year round, regardless of the season, one speaks of perennial, i.e. year-round allergic conjunctivitis.

At the cellular level, the following processes lead to inflammation: The allergen is dissolved in the tear film and migrates through the layers of the mucous membrane. When it hits an inflammatory cell, it releases histamine. This is a messenger substance that causes further inflammatory cells to be attracted. The inflammation is reflected in the eye as redness, water retention and itching.

Allergic conjunctivitis manifests itself through typical symptoms such as itching and burning, red eyes and sticky eyes due to escaping secretion. The reddened eyes are the clearest sign of the disease and usually appear on both sides. With pronounced conjunctivitis , the lids and parts of the face can also be red, depending on the allergen.

In addition to these complaints, there is usually a feeling of pressure on the eye, which increases when touched. The flow of tears is increased and there is increased swelling in the area of ​​the conjunctiva. Affected people are shy of light and the eyes are sensitive to stimuli such as cold or heat. Typical allergy symptoms such as sneezing and runny nose can also occur. The airways can also be affected: breathing difficulties , coughing and sputum result.

The diagnosis of allergic conjunctivitis can primarily be made on the basis of clinical symptoms. While other forms of conjunctivitis, dry eyes and have blepharitis be excluded.

The most common symptom of allergic conjunctivitis is itching and a condition called chemosis. This is massive conjunctival swelling due to fluid retention. The fluid arises because the vessels of the conjunctiva become more permeable as a result of the inflammatory processes. The eye then looks glassy and can protrude noticeably from the eye socket.

Those affected also suffer from watery eyes and sneezing . In so-called spring catarrh, which often occurs in young men, growths can form on the inside of the eyelid. Deposits on the conjunctiva can also occur.

Allergic conjunctivitis occurs as part of an allergic reaction. One possible consequence is a so-called superinfection . Due to the allergy, the immune system in the eye is weakened and pathogens can penetrate more easily and also infect the eye. This makes treatment much more difficult.

In the course of the eye inflammation, in the worst case scenario, the cornea can become cloudy, which can severely impair vision. In the rarest of cases, the affected person becomes blind . The inflammation can also lead to the formation of scar tissue on the eye, which also causes the cornea to become cloudy.

However, the scar tissue can also block the tear ducts and thus prevent the eye from becoming wet, which then dries out. In addition, an allergic reaction also leads to swelling of the airways. This typically leads to severe shortness of breath and difficulty swallowing for the person concerned.

Quincke’s edema is also conceivable, with fluid accumulating in the deep layers of the skin, leading to even greater swelling. The worst case of an allergic reaction is anaphylactic shock, in which there is a sharp drop in blood pressure. This can be a life-threatening condition, as as a result, important organs are no longer supplied with enough blood and can therefore fail.

When should you go to the doctor?

The tearing, itching, and burning sensation associated with allergic conjunctivitis can sometimes be effectively relieved with cool compresses or artificial tears. These are available in any drugstore without a prescription and can be stored in a cool place for a long time.

In this case there is no need to see a doctor. Stubborn complaints sometimes hide a more serious eye disease, which announces itself at the beginning with symptoms similar to the “red eye”. An ophthalmological examination is unavoidable after six hours of constant complaints at the latest.

Allergic conjunctivitis is very uncomfortable, especially for younger children. Since these are difficult to keep from rubbing the eyes, there is a risk that bacteria will penetrate or the conjunctiva will swell painfully. Children affected by allergic conjunctivitis should therefore always see an ophthalmologist.

If patients of all ages suffer from conjunctivitis on a regular basis, an allergy test is recommended. It is offered by ear, nose and throat specialists, dermatologists (dermatologists) and general practitioners alike . For a precise diagnosis, however, specialist training in allergology is essential.

The use of antihistamines is also possible. They inhibit inflammatory cells from secreting histamine, which triggers the symptoms. Antihistamines are available from pharmacies as part of tablets, juice or eye drops.

Eye drops have the decisive advantage over the other preparations that they act directly on the inflammatory process and the effect occurs after a few minutes and usually lasts for up to 12 hours. They are also commercially available as single doses and then usually do not contain any preservatives.

One drop is placed in each eye. The duration of treatment with antiallergic eye drops should be limited to two weeks in the case of self-medication. If the doctor prescribes it accordingly, it can be used for months. Redness and burning sensation can occur as a side effect. In case of hypersensitivity, antiallergic eye drops are contraindicated.

Short-term cortisone can also bring relief in the case of greater distress . However, preparations containing cortisone should be used very carefully. With prolonged use, they can lead to cataracts (clouding of the lens) and glaucoma (increase in intraocular pressure).

Occasionally, conjunctivitis is due to poor hygiene. Then it is the bacterial toxins that cause the inflammation. Antibiotic use should be considered in this type of conjunctivitis .

With this disease, there are mainly severe discomfort to the eyes. Those affected mainly suffer from itchy and red eyes. However, scratching and rubbing the eyes usually only exacerbates the itching. Without treatment, conjunctivitis can also occur. The patients suffer from severe pain directly in the eyes. The eyes themselves can water and are in many cases sensitive to light.

If there is no treatment, this complaint can also lead to vision loss or visual problems. It is also not uncommon for people to sneeze heavily. The eye itself also mostly protrudes from the eye socket and can look unusual. Especially in children, this complaint can lead to bullying or teasing. All of these symptoms reduce the patient’s quality of life.

In most cases, the disease can be treated with medication. Eye drops are also used. The life expectancy of the patient is not restricted. In some cases, a cataract or glaucoma can occur even after the treatment.

As a preventive measure, people who frequently suffer from conjunctivitis should use allergy-tested cosmetics and not touch their eyes. Hands should be washed regularly to prevent bacterial infection.

In addition, follow-up care by an ophthalmologist is recommended after severe cases of allergic conjunctivitis. He will also provide information about individual follow-up care measures. The general practitioner and contact person are also professional contacts. Red and dry eyes are hallmarks of the irritative state of allergic conjunctivitis. The sensitive conjunctiva of the eye must therefore be protected from further irritation during aftercare.

This applies to sharp cleansing products on the face as well as to make-up such as kohl, mascara and eye shadow or drops of sweat that can trickle into the eyes while exercising. Moisture drops for the eyes can be used in consultation with the ophthalmologist in order to moisten the eyes in a targeted manner and to consistently prevent further irritation.

Allergic conjunctivitis follow-up care for pollen avoidance includes washing your hair before bed during the pollen season, using pollen filters in the car, and cooling your eyes instead of rubbing your fingers and irritating them if it itches . Walks with pollen count are usually less allergenic in the evenings.

You can do that yourself

Allergic conjunctivitis is conjunctivitis of the eyes, which usually has a good prognosis and for which those affected can do a lot in everyday life to prevent or alleviate the classic symptoms.

The prerequisite for this is, among other things, the willingness of the patient to avoid the triggering allergen as far as possible. This applies to the pollen filter in the car and the nightly washing of hair in the case of pollen allergies as well as to the renouncement of cosmetics, in which the person concerned is allergic to certain ingredients. All of this can serve to limit the extent of allergic conjunctivitis somewhat in advance.

When conjunctivitis breaks out, there are also some ways in which the person affected can contribute to rapid healing. In this context, it is particularly important that the patient controls himself despite the sometimes severe itching and does not constantly rub his eyes with his fists.

Help is provided by wetting the irritated area around the eyes with cold water or applying a cool compress . In consultation with the attending doctor or ophthalmologist , special solutions can also be used to provide the eyes with moisture. They are ideal against the dryness of irritated eyes and in many cases also take away the feeling of having a grain of sand in your eyes. 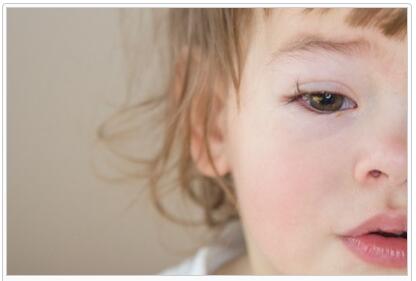